Thank you for visiting Baja FreeDiver. This website hopes to engage the Baja underwater enthusiast. With locations, maps, G.P.S. coordinates and much more, Baja FreeDiver aims to guide the subsurface adventurer in you to the right place at the right time for the best snorkeling or diving experience possible. We hope that we can make your time in the magnificent Sea of Cortez that much more enjoyable. Navigate through our site, and whether you are a seasoned Baja traveler or a newbee, we hope that we can provide valuable information for your adventure.

There is something thrilling about the unknown. In actual fact, not knowing is the essence of romance. Maybe that is why we picked a spot to jump off into the sparkling green water that encompassed Isla Espiritu Santo. There was not another soul in sight, and we were in one of Baja California’s most stunning snorkeling locations.

Jumping off the boat, snorkling gear intact, my mother took my lead and followed me around the small rock outcropping that we had chosen to explore. Our eyes were met by numerous Finescale triggerfish, Green Morey eels, their snake-like bodies slithering through cracks and crevices, beds of Pearl oysters, and vibrantly colored Wrasses.

I spotted a group of Red starfish and pointed them out to my snorkling companion. I knew that she would be excited to see them, as she has decorated her home with desiccated starfish throughout her life. We held our breath and dove down to take a closer look. She looked at me, and I could see her eyes smiling through her mask.

Returning to the boat, we took a breather and talked about where to venture to next. We had heard about the many uninhabited coves that were strewn about the island, so we asked our captain to lead us to one.

Rounding a corner in our 26 foot Pursuit boat, the Maria Teresa, we were delighted to see a spectacular uninhabited white sand beach nestled between two dramatic cliffs. To our right, there was a magnificent recreation of a pirate ship anchored in the cove, inhabited by tourists with kayaks, and, I imagine, snorkeling and dive gear. I was momentarily transferred back to a time when fortune-seeking hunters plundered this island for the bounty of it’s oysters. The gigantic pearl that still adorns the Queen of England’s crown actually comes from this region.

Moving on, we decided to check out what the more tourist-laden sites on the island had to offer. It was time to visit the Sea Lion colony.

Diving off of the boat back into the Sea of Cortez, we were almost immediately approached by a juvenile Sea Lion. In a display of territoriality, the animal got a little too close to my mother, giving her a scare. For the most part, though, these mammals were used to the frequent stops made by boatloads of curious humans, and they have grown accustomed to our presence.

Returning to the boat, we discussed what we had seen with the captain. We made our way back to the harbor in La Paz refreshed and rejuvenated by mother nature.

The Pearl Oyster shares a relationship with Baja Californiano's that is at once both fascinating and tragic. A mixture of politics, love, and corruption run through the story like a good novel.

At the dawn of the 20th century, Don Gaston Vives established a company with the intention of cultivating and harvesting Pearl Oysters off of the island of Espiritu Santo. Between the years of 1909 and 1914, Dr. Vives averaged an annual harvest of between 200,000 and 500,000 oysters, the pearls of which the multi-lingual Doctor sold directly to European Jewelry houses. It was a time of revolution in Mexico. Dr. Vives, whom was also a well-respected politician in La Paz, was at odds with a charismatic yet ill-intentioned man by the name of Miguel Cornejo. Cornejo so impressed the General in charge of Northwestern Mexico that he was granted ships and men to allegedly hold off the revolution by the Yaqui Indians.

He had other plans.

Cornejo and his men looted and destroyed the totality of Vives’ crops which his company had carefully groomed for so many years. Afterwards, the captain and his men set their sights on Vives’ home in La Paz, where they looted and destroyed over 1,000 scientific books kept in the Dr.’s safe. Vives, fearing for his life, escaped to a nearby beach, where he convinced a fisherman to hide him on a nearby island. Eventually, he made it safely to the mainland. Vives spent the remainder of his life attempting both to recover what had been illegally taken from him and to raise funds in order to restart his operation, but his efforts were in vain.

This is the Los Barriles fishing report for July 16th - July 23rd.

Congratulations to "Miller Time" for winning the Van Wormer Resorts 15th Annual Dorado Shootout on Saturday, July 21st. With 144 boats competing and over 550 people in the running, Jerry Pifer and his wife took home a new VW 4 X 4 Amarok on a superpanga with their 47.5 lb bull dorado. The second place team swept the side jackpots and took in over 125,000 dollars with their 40 lb bull dorado caught on a cruiser. Thanks to all who participated in this year's tournament. It was a blast.

The weather conditions were favorable all week with the wind remaining mostly calm and the air and water temps in the mid-eighties. On some days, there was a slight breeze from the southeast, but nothing so strong as to spoil the fishing.

The big story this week in the world of yellowfin tuna was a cow being brought in at 182 lbs. It was hooked underneath a school of porpoise. The tuna bite continued to pick up all week with most of the fish being in the 20 - 30 lb. range and taking lures and sardines.

The wahoo are still in town, making for some exciting sportfishing and tasty steaks. Los Barriles anglers were bating the 20 - 40 pounders with lures and live bait.

After several weeks of moving up the curve, the striped marlin bite finally slowed down. It's larger cousin, the blue marlin were still in, with the large pelagic fish being caught and released in the 200 - 250 lb. range. They were taking lures and ballyhoo.

Good news for all the fly-fishermen and near-shore enthusiasts. The roosterfish bite continued to be good this week. Although the size dropped a little into the 20 - 30lb. range, they are still creating an exciting sportfishing experience for anglers before we release them back into the wild.

The pargo, snapper and grouper fishing is excellent, as is usual for this time of year.

Book your Los Barriles fishing charter on the Maria Teresa and get on down here! We would love to have you. 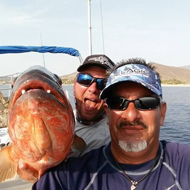 Charter the Maria Teresa, a 26” Pursuit boat, for a half or full day of East Cape sport fishing in charming Los Barriles, B.C.S., Mexico.

“After fishing, camping, and being a home owner between Cabo San Lucas and Los Barriles for forty-three years, I have finally found the place where I want to settle. Los Barriles is the ideal spot for anyone who wants a combination of a relaxing beach getaway and a top-notch sport fishing location.”

For the angler who wants to go sport fishing without all the hype, Los Barriles is a prime destination. Located just a forty-five minute drive from San Jose Del Cabo international airport, this quaint and charming beach town offers everything one needs to get in on the big game fishing action. There are several hotels that offer full and half-day charters, as well as independent boat owners whom offer direct bookings.

One such independent charter operator in Los Barriles is 26” Pursuit boat owner Mike Vos. Equipped with outriggers, tuna-tubes, and a center consul with a restroom, his boat has been a success with fishermen since it’s first charter in 2015.

With prices substantially less expensive than it’s competitors, the Maria Teresa is likely to get you the most bang for your buck. Captained by the bilingual and third generation Mexican fisherman Israel Castro, you are just if not more likely to get on the fish than if you had spent more money on a more ostentatious boat.

Berthed just south of Las Palmas Hotel in majestic Los Barriles, B.C.S., Mexico, the Maria Teresa is available for full and half-day charters through November 15th, 2017. The boat is equipped to handle up to four anglers at a time and is fully equipped to handle Marlin, Tuna, Wahoo, Dorado and Roosterfish. No one can leave Los Barriles without feeling an authentic taste of Baja Californian culture. Find out more at chartermariateresa.com

Art collectors, art dealers, art lovers, and automotive enthusiasts worldwide may now view and purchase the timeless work of American artist Tom Fritz online. The website, launching this Friday, July 9th 2017, currently features over one hundred fine art originals as well as seventy one fine art prints. It may be browsed from any mobile device or computer at www.fritzart.com.

If you are interested in Harley Davidson Art or Hot Rod Art, you are going to want to peruse this website. A fine art print or original from Tom will make a prime addition to your home or to your art collection. It could also make for a top-notch gift.

Support the arts and garner a piece of vintage America by buying online this Friday. Tom has a milieu of followers, so get there fast before the painting that belongs in your living space has already been bought.

Tom has been capturing the life and times of American Harley-Davidson and Hot Rod motorists with his brush since 1980. In 2014, The United States Postal Service awarded him with the commission to paint the Muscle Cars for their special series of stamps.. Tom now lives and paints from his home and studio in Newbury Park, CA visit http://www.fritzart.com